A new HIV testing campaign is encouraging people from Culturally and Linguistically Diverse (CALD) backgrounds to check their HIV status. The campaign (1-7 June) combines testing promotion with the ‘#EASYTOUR’ music tours and aims to raise awareness of the importance of HIV testing.

Getting a HIV test is now easier and faster than ever before, according to the NSW Chief Health Officer Dr Kerry Chant.

“The government has made significant progress in making HIV testing easier and faster by providing a mix of high quality, safe and innovative HIV testing services such as rapid HIV testing, express clinics, after hours and drop in clinics, faster results and online booking which are all part of the new era in HIV testing in NSW. People can also request a test at their GP.”newendinghivccollage 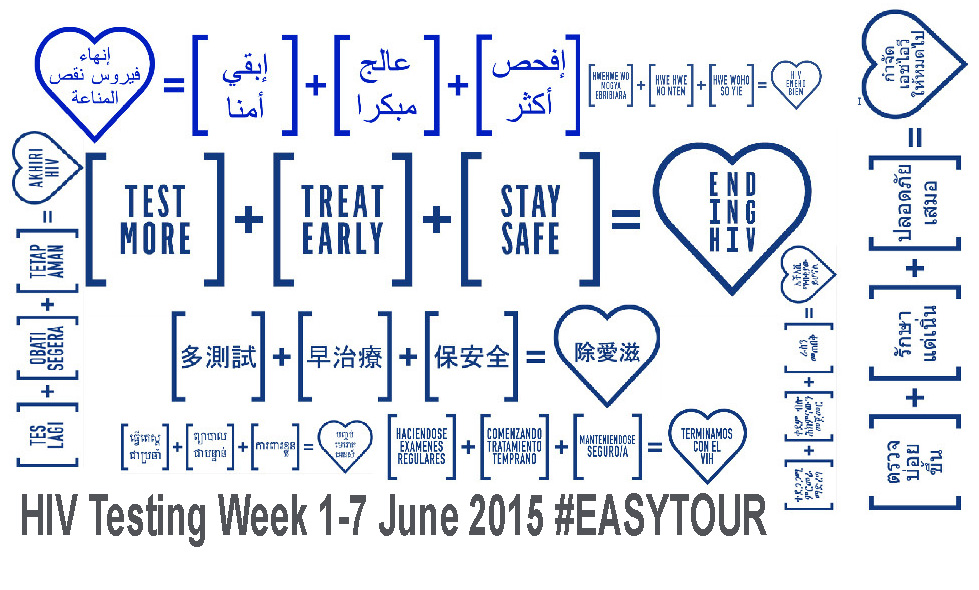 “Increasing testing rates is vital because HIV is generally transmitted by people who don’t know they have it,” said Dr Chant.

These developments offer great opportunities for people from CALD backgrounds, according to Gabrielle Stackpool, Acting Manager of the Multicultural HIV and Hepatitis Service (MHAHS).

“We are excited about the new developments in HIV testing and welcome the addition of campaign messages in different languages. We can now promote the messages to best fit with the CALD communities. Involving communities in their own initiatives is the only way to ensure such campaigns are relevant and inclusive,” said Ms Stackpool.

Artist Justin Xiao, 22, faced discrimination as a result of his HIV status. Justin identifies stigma as one of the key challenges behind increasing HIV testing.

“There is a real social stigma behind the HIV label. Some people see you as a threat to their personal life and that’s really painful. Stigma discourages you from getting tested. I hope my story will help prevent others from living similar experiences," said Mr Xiao.

HIV/AIDS awareness remains low in many CALD communities. The stigma attached to HIV means it’s difficult to talk about and causes anxiety about testing. As well as the fear of being diagnosed HIV positive, people also worry about confidentiality, which can stop people from testing at all, particularly those from communities where there are very high levels of HIV-related stigma and discrimination.

The Sydney Local Health District based MHAHS is undertaking several initiatives during HIV Testing Week. As well as implementing an ethnic media campaign across eight languages, it is partnering with the South Eastern Sydney Local Health District to organise a HIV forum titled Ending HIV: Ensuring CALD communities are not left behind and support a purpose built HIV testing “Pop-Up” Bus in Rockdale.

The multilingual Ending HIV equation of the campaign promotes three steps to eliminate the spread of HIV by 2020:

Test More - more of us need to get tested more often, as this is the only way that undiagnosed infections can be decreased and access to treatment can be increased. How often depends on our lifestyle and sexual behaviour.

Treat Early - advances in HIV medicines offer improved health benefits for people with HIV and can reduce traces of the virus in their body to an undetectable level. This significantly reduces the likelihood of transmitting HIV.

HIV is most commonly transmitted through unprotected sexual contact. Condoms are one of the most effective ways to prevent the transmission of HIV.

There is currently no cure or vaccine available for HIV/AIDS, but there are effective treatments that can greatly slow the effect HIV causes to the body.

For further information on free and anonymous HIV testing, please contact your local sexual health clinic, listed under Sexual in the White Pages. To contact a service using a telephone interpreter, call 131 450 from anywhere in Australia for the cost of a local call. Discussions through an interpreter are always confidential.

Some of the major sexual health clinics In Australia include:

AIDS is a disease caused by a virus known as HIV and affects men, women and children from all cultures, countries and religions.

About the MHAHS (Multicultural HIV and Hepatitis Service)

The Multicultural HIV and Hepatitis Service, hosted by the Sydney Local Health District, employs workers from more than 20 language backgrounds, including Asian and African languages, who provide support to people affected by HIV in NSW. The workers are bound by strict laws protecting the privacy of the people they support. The service is free and no identification of any kind is needed. It can be reached on (02) 9515 1234